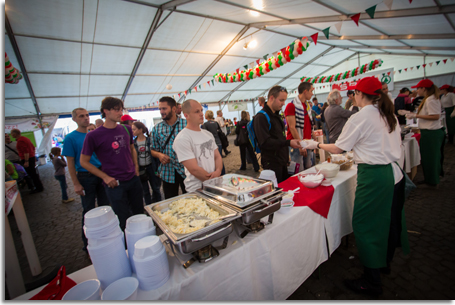 Realizing that the announcement was made too late and accepting the opinion of a lot of a people, we are going to change our former decision and the pasta party will be free for individual entrants of the marathon and the 30K.

We have held a pasta party for the last 29 years of the history of the Budapest Marathon.

The number of participants has increased substantially over the last couple of years, on the other hand, the proportion (max. 23%) and also the number of runners taking part in the pasta party is smaller and smaller. Therefore there is a lot of uncertainty about the amount of pasta we should order – it is bad if there are several hundred  portions left – or even a thousand, as it happened once – but it is equally bad if there is none left for those who should get some. We have to follow food hygiene rules so we can only store the freshly boiled pasta for 40 minutes, after that it has to be thrown away, so unfortunately we can’t donate the rest for charity. We have had a look at other events in the world to see how they try to reduce wasting food and this uncertainty and we have found in lots of places that the entry fee doesn’t include participation in the pasta party.

That’s why we made the decision that from this year on, we are going issue pasta party tickets that can be purchased. Our decision was made public last year when the event was announced.  According to the event information published at that time:  ’you can take part in the pasta party by puchasing the pasta party ticket.’As the details only became clear at the beginning of August, it was that time that we were able to announce the possiblity of purchase. We knew that the decision would not be a resounding success and we were right. Realizing that the announcement was made too late and accepting the opinion of a lot of a people, we are going to change our former decision and the pasta party will be free for individual entrants of the marathon and the 30K this year as well.

We have introduced only one restriction to avoid the problems mentioned above: we are going to order 2300 portions of pasta –  considering the amounts in previous years, it should be enough.

We can ensure that the first 2300 people who redeem their pasta party tickets can take part in the pasta party. We apogolize to those who will be beyond this limit or who will not get the kind of pasta they requested.

We are going to send an email until 22 September about what to do next to those who have already purchased the pasta party tickets.

Thank you for your understanding and we wish you all the best for your preparation for the race!

There are many ways to finish. The main thing is t

Budapest is wonderful, a popular destination for r

The Wizz Air Budapest Half Marathon is Hungary's f

The Wizz Air Budapest Half Marathon is Hungary's f

Run your 2023 marathon in exciting Budapest! In O

Run in Budapest in all seasons, it's beautiful! T